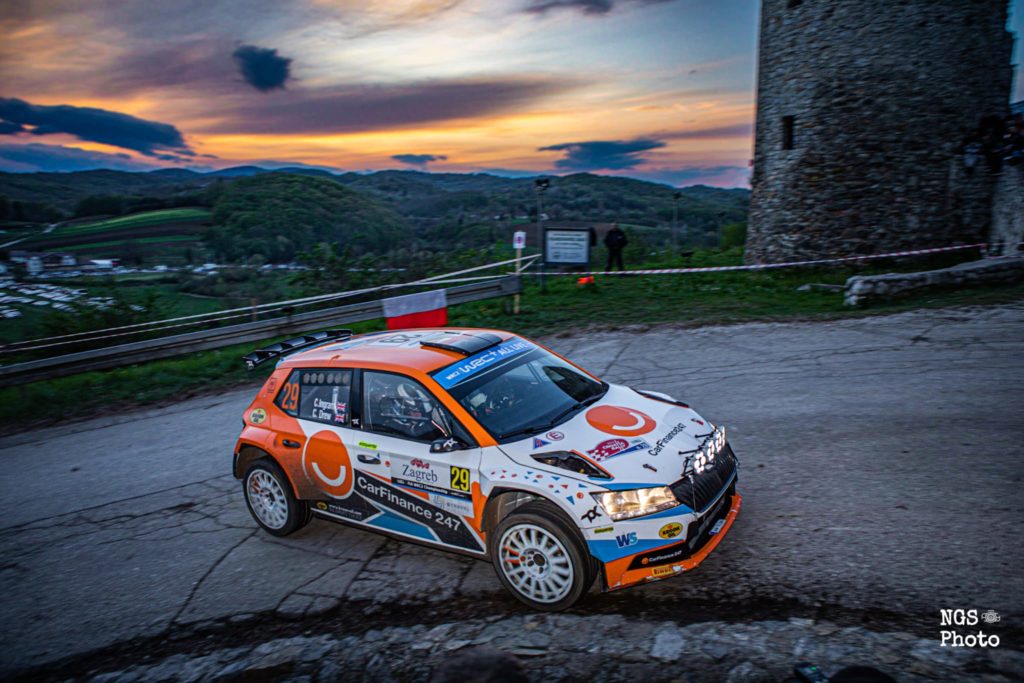 A clean pair of heels…

Weather conditions made Rally Croatia one of the toughest tarmac rallies in recent WRC history, yet Ingram overcame all that was thrown at him to finish a respectable 11th overall and 3rd in the WRC2 Junior category for drivers under 30 years of age.

Starting off his new relationship with eight times American Rally Champion Co-Driver Craig Drew, the British duo had a blistering start to the 20 stage event in the Car Finance 247 Skoda Fabia Rally 2 Evo. After the opening loop of four stages, Ingram and Drew lay first in WRC2 Junior and 2nd in the WRC2 overall running, also as the leading Skoda, showing their rivals how it’s done in the wet and foggy conditions.

On stage 5, the Brits were one of many crews to suffer a puncture and opted to lose as little time as possible running 14kms on the flat rear tyre, dropping the pair down to 5th in WRC2 on Friday afternoon. Chris and Craig put in a measured drive to survive the rest of the day nursing some further issues with yet another puncture on the final stage.

Saturday saw the pair struggle on the more treacherous stages due to only having limited wet tyres available after Friday’s punctures. In the dry conditions Chris once again set podium times in WRC2 just 1 second off the fastest time on a number of stages. Confidence was regained and they were on a charge once again.

Sunday, the final leg, delivered the pièce de résistance with the British pair rose to the challenge of more changeable conditions setting the third overall fastest stage time of the rally on SS19, beating almost all of the leading WRC1 teams, Ingram was on it!

A WRC2 car is significantly underpowered compared to a WRC1 car yet Ingram showed his skill to beat WRC1 title favourite Thierry Neuville on Stage 19 by 1.3 seconds who commented he had “a good stage”. The Brits also strengthened their lead over French stars and former WRC1 drivers Stephane Lefebvre and Eric Camilli. The WRC commentators bubbled with excitement shouting ‘Ingram has just gone the third fastest in the World’.

An accolade many will never achieve…

Chris and Craig finished the rally an impressive 11th overall after clawing back much of the lost time from the punctures. Ingram has yet again stamped his authority amongst the best WRC2 drivers in the world, this time in-front of 400,000 passionate Croatian rally fans who endured the horrendous conditions to see the world’s best drivers in action.

Ingram commented. “I am proud of our performance. We delivered an incredible pace which has given me the confidence we can be fighting for the win every time. Bring on Portugal.”

With the new partnership put to the test from the get-go, Craig Drew also commented: “I knew Chris was a quick driver, but I didn’t quite realise he was that good. The talent is undoubtedly there, and I can’t wait for the rest of our season”.

The next round of the FIA World Rally Championship for the Rally Warrior Team is the Vodafone Rally de Portugal from the 19th – 22nd of May based in Porto.

Rally Warrior would like to thank all our sponsors and valued fans for your continued support in our quest to be WRC World Champions of the world.