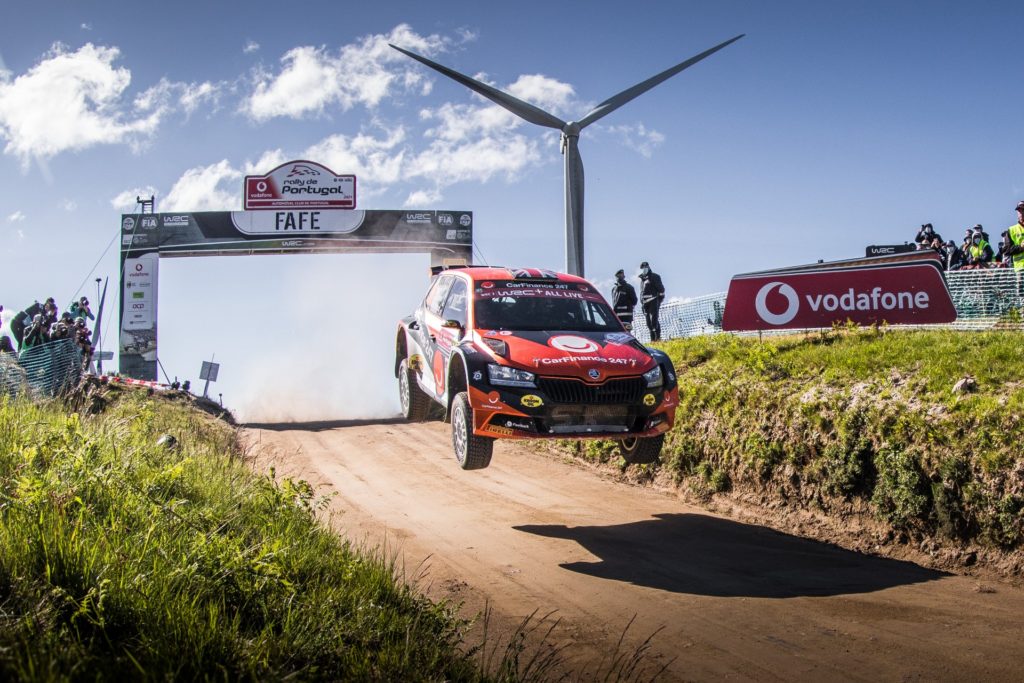 Rally Warrior duo Chris Ingram and Ross Whittock scored their first ever WRC3 podium place at Rally Portugal this weekend. The British pair came third in what is being described as one of WRC3’s strongest ever line-ups comprising 24 entrants.

The FIA World Championship race is only their second WRC3 event, following an 18-month break and clearly demonstrates their huge potential. Chris Ingram said: “We’ve made a great step forward again. Now we’ve shown that we’ve got the speed to win stages. My aim is to do that consistently over a whole rally and try to win. But we’ve learnt that the tyre strategy is critical on these long demanding World rallies.” Chris Ingram set pace from the start, finishing their first loop in P3. The rest of the day brought its challenges and by the Góis stage, they dropped around 40 seconds after getting caught in the dust caused by a slower car. The young Brits then trailed the leaders by 53.5 seconds. Notional times were given which put Ingram back on the podium by the end of the day, only 4 seconds off the lead.

On day two, the pair had the wrong tyre strategy, which cost them a lot of time. They still kept close to the leaders, just 51.8 seconds behind Kajetan Kajetanowicz. By day three, the team made a better choice of tyres and set two fastest time. On two stages, Chris and Ross were also in the top ten overall amongst the top WRC1 drivers. Kajetan Kajetanowicz eventually won the race ahead of WRC3 driver Yohan Rossel. Chris and Ross finished in 3 rd place overall. Co-driver Ross Whittock said: “It was a tough weekend with many positives to take away. We showed great pace on Sunday which will push us forward going to Sardinia.”

Adam Shore, Director of Rally Warrior, said: “There were a lot of experienced crews out there and Portugal is a technical event requiring a lot of experience. It was never going to be easy and we made a few calls which cost us time, but for them to get two fastest times and a very positive overall result is fantastic. We all aspire to improve from third, we’re learning all the time and can’t wait to get back out there.” James Harrison, CEO of Protec and sponsor of Rally Warrior, said: “This is a new campaign for us all. For Chris and Ross to win a podium place in only their second ever WRC3 event, speaks volumes. We’re delighted to be supporting him on what’s already a very exciting year.”

The team now has just ten days to reset, before heading to another all-gravel event for the next round of the FIA World Rally Championship, Rally Italia Sardegna starting on 3rd June.