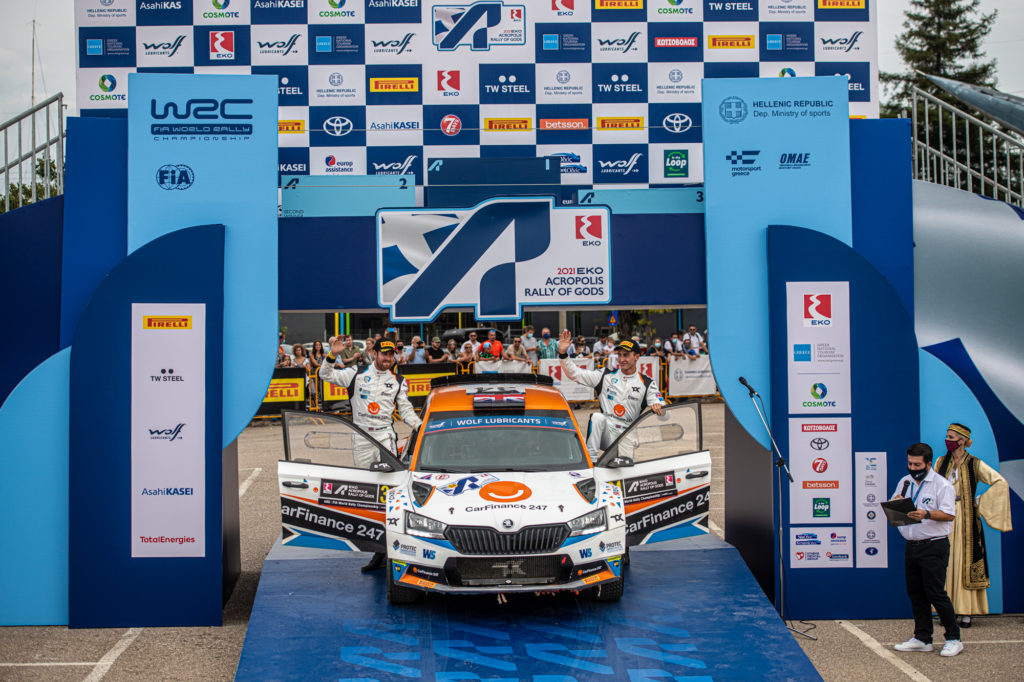 Chris Ingram and Ross Whittock celebrated another podium finish coming second in WRC3 at Rally Acropolis 2021. The result was the prefect start to their return to TokSport driving their Škoda Fabia Rally2 evo.

The Rally Warrior pair set an impressive pace which kept them in the top three times for each stage. By the end of stage 6, they were in P1, proving their growing confidence on the world stage.

Day 2 saw Rossel quickly turned the tables, pushing ahead and leaving Ingram to battle tightly with Kajetanowicz. Eventually the Brits finished the day in third, 15.4sec behind the Pole.

On the final day, Ingram and Whittock did their best to chase down the overnight leaders Rossel and Coria, but the two Frenchman came in first, followed by Kajetanowicz and Szczepaniak, 14.5 seconds ahead of them. However, Rossel was disqualified after the front subframe on his Citroën C3 Rally2 was found to be overweight, leading Ingram to take second place overall.

Chris Ingram said: “Being back with TokSport has given us some confidence. The car feels strong and my driving is getting better and better. I’m really proud of the pace we showed to lead the class and we’re satisfied to collect another podium finish amongst some amazing competition. Huge thanks to everyone who has supported me, my fantastic team Toksport, Ross Whittock, Scott Quigg and all of my partners.”

Adam Shore, Director of Rally Warrior said, “This is a great result for Chris and Ross. We know they have the ability and the new partnership with Toksport gives them a platform to go out and win races. We’re even more excited for Catalunya now. They’ve proved they are contenders for the top.”

Ingram and Whittock’s next race is WRC Rally RACC Catalyna from 14-17 October, which is the final race of their 2021 season.