Ingram leads the Championship after showing best pace yet in Sardinia 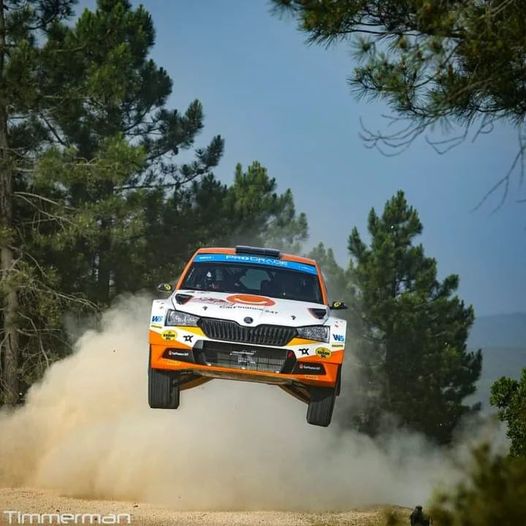 New co-driver Craig Drew has proven a successful addition to the team with the British crew securing podiums on every rally so far. Their overall win on the UK’s North West Rally set the Brits up nicely for the WRC and have since secured a podium in Croatia, a dominant victory in Portugal and another podium in Sardinia. They led both Croatia and Sardinia but a rear puncture on both events was enough to take victory chances away. The high level of competition in WRC2 means that every second counts.

Ingram and Drew kept their CarFinance247 x Kroon Oil backed Skoda Fabia Rally2 Evo in one piece on another brutal World Rally, and praise the Toksport WRT mechanics for building such a strong car.

Rally Italia Sardinia is widely renowned as one of the most gruelling rounds of the WRC, with temperatures reaching up-to 65 degrees inside the car. The conditions didn’t deter Chris and Craig from setting their best stage performances with a number of WRC2 stage wins, and on the penultimate stage finishing just a handful of seconds behind the WRC1 rally leaders.

The FIA WRC2 Junior Championship is for drivers under the age of 30 in Rally2 specification cars, who are battling to secure a factory drive with one of the WRC1 manufacturer teams. The driver’s best 5 scores out of a total 7 rounds count towards the final standings. After a fast and consistent start, Chris can afford to push for victories on each of the remaining three rounds.

Chris Ingram commented; “I’m very proud of my performance in Sardinia and the pace we showed on some incredible stages. We’re in a fantastic position in WRC2 Junior and the WRC2 overall standings. I’ve driven intelligently and not put a mark on the car, without a few punctures it could be even better but I’m feeling confident for the 2nd half of the season. I’ll be training hard over the next 6 weeks and will come back even stronger.”

The next WRC Round planned for Chris Ingram is the iconic Ypres Rally (WRC Belgium), August 18-21.