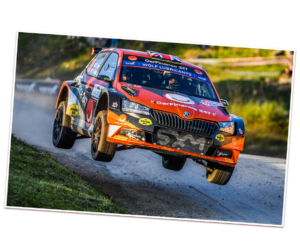 Chris Ingram’s much anticipated debut in the World Rally Championships (WRC) got off to a promising start at the Croatia Rally 2021, finishing in 5 th position in a hugely competitive WRC3 field. Partnered with co-driver Ross Whittock, the race was their first since winning the 2019 European Championships, driving their new SXM Competition prepared Skoda Fabia as part of their team Rally Warrior.

Chris Ingram said: “Being back after one and half years out of rallying, has been a difficult jump at this incredibly high level, but I’m happy to take the tough lessons and to have finished the rally.

‘Rally Croatia was by far the toughest rally and circumstances I’ve ever experienced. A few years ago we were fighting at the top of every rally so it’s been very hard to accept it’s going to take some more time and practice to get back to that level and beyond.”

The opening stage South-West of Zagreb proved tricky conditions with gravel dragged on to the asphalt. Chris and Ross had a very strong first loop and finished 5 th after the first day. The morning of day 2, saw them climb to P3 but by stage 18 on the final day, they suffered a small off with a bent steering wheel, which eventually led them to finish in 5 th position overall.

Whilst Polish driver Kajetan Kajetanowicz took victory, Ingram showed he is still very much a contender for a podium place. Adam Shore, Director of Rally Warrior said: “This a solid foundation to build on and Chris and Ross have proved they are still capable of challenging the top. Rally Warrior is a new team and this is certainly just the beginning of what we can do. We will closely evaluate what went right and wrong in Croatia, and plan for improvement from Portugal onwards.”

The team will now enter the first round of the Portuguese championship Rali Terras d’Aboboreira as part of their preparation for Rally Portugal. 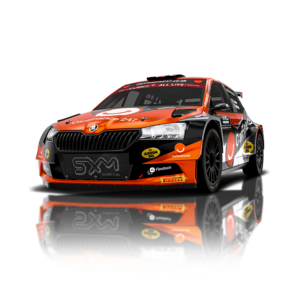 Chris Ingram’s FIA World Rally Championship adventure starts today, thanks to a key partnership with CarFinance 247 and a series of new sponsorships. Following Chris and co-driver Ross Whittock’s success in the European Rally Championship where they became the youngest ever champions, the pair will begin their first World Rally Championship challenge on the Croatia Rally from April 22-25. Having previously struggled financially and even running a successful Crowdfunding campaign, his WRC mission is set to be very different. His growing success has attracted significant attention from sponsors and enabled him to create the Rally Warrior team. With SG Financial and Fladgate acting as advisors, a number of new sponsors have been signed, backing his world title ambition.

Adam Shore, Director of Rally Warrior said, “Chris has battled for several years to finance his career. We felt the desire to step in and make sure Chris and Ross are given the chance at WRC which they deserve. They exemplify resilience and outstanding performance, and fans really want to see these rising stars compete.” CarFinance247, the online car finance marketplace, which is based in Manchester, Ingram’s home city, is announced as Ingram and Rally Warrior’s key partner. “We’ve been part of Chris’s journey for the past four years and have been continually inspired by his dedication, skill, and willingness to triumph over adversity,” said Louis Rix, co-CEO of CarFinance 247. “On and off the track, Chris embodies our company’s values – his resilience, passion, and commitment to teamwork are all qualities that we aspire to promote and demonstrate every day. “When we launched CarFinance 247, we set out to shake-up the car finance industry. Teaming up with a driver like Chris, who is single-handedly revolutionising the UK rally scene, could not be a more natural partnership for a business like ours. “Now that he’s taking his rightful place on the world stage, we’re proud to be able to support him once again and play a part in his inevitable rise to the top.”

Alongside the new partnership with CarFinance 247, Ingram announced a series of new sponsors: Protec, Kroon-Oil, Fleetback, WS Transportation, HAH Whisky, Stilo Helmets and race-wear partner FreeM. The logos of all sponsors will appear on the car designed by Kyriakos Taliotis. James Harrison, CEO of Protec said, “As a successful high tech British Manufacturer, we like to be associated with winners. Against all the odds, Chris has shown that he can achieve great things by winning the European Championship. By supporting him in 2021, we want to raise our profile globally and the WRC provides us with an exciting, dynamic platform on which to communicate our goals.” “

Kroon-Oil has been a strong partner in several rally competitions for years now, said Leon ten Hove, Marketing Manager, Kroon-Oil. “From this perspective we have bee following Chris and Ross for a while. Thanks to our partnership with SXM & J- Motorsport, we have reached an agreement on our support for Chris and Ross’ talent and ambitions for the upcoming WRC season. We are very pleased to be able to announce this partnership with Chris and Ross in the WRC. This cooperation reflects our strong market position as a high-level lubricant brand. We need strong partners and international visibility to support the international growth we have realised and the WRC with Chris and Ross fits perfectly.”

Chris has joined forces with the vastly successful SXM Competition team from Belgium to pilot a Škoda Fabia Rally2 Evo. “As a team we wanted to do another program in WRC-3, because this is the highest level of motorsport. I was very honored that Chris contacted me to see if we could have a collaboration, said Fred Miclotte from SXM Competition. “I have known Chris and Ross already for some time and I’m sure they form a fantastic team together. I think that we all have the same goal for 2021. We all want to show our potential and that’s why I believe so much in it. ”

Chris Ingram added: “Winning the European Rally Championship was just the beginning for me. With the creation of Rally Warrior and the support of my sponsors, I’ve got the best opportunity to focus on what I do best: driving fast. I’ve got every chance now and I’m just incredibly excited to get back out there competing with the world’s best. I was born to rally, WRC is the pinnacle of motorsport and I am so grateful to everyone involved in making this chance a reality.”

Chris Ingram will follow in the wheel tracks of his rallying heroes Richard Burns and Colin McRae when he embarks on an FIA World Rally Championship adventure for the first time.
The 26-year-old from Manchester in the United Kingdom won the FIA European Rally Championship in 2019, the first Briton to do so since motorsport all-rounder Vic Elford claimed the coveted title 52 years previously.

He has joined forces with the vastly successful SXM Competition team from Belgium to pilot a Škoda Fabia Rally2 Evo. Fellow Briton Ross Whittock, 29, will co-drive. Whittock was previously awarded the Michael ‘Beef’ Park Trophy for the highest ranked British co-driver under 25 on Wales Rally GB. He also won the European title with Chris.

“I have known Chris and Ross already for some time and I’m sure they form a fantastic team together. I think that we all have the same goal for 2021. We all want to show our potential and that’s why I believe so much in it, ” said Fred Miclotte from SXM Competition. Having previously Crowdfunded his rallying career, Chris starts his World Rally Championship programme in a very different situation with growing support from commercial brands. Under the Rally Warrior banner and with SG Financial and Fladgate acting as advisors, Chris Ingram has secured a number of new sponsorships, backing his world title ambition.

Adam Shore, Director of Rally Warrior said, “Chris has battled for several years to finance his career. We felt the desire to step in and make sure Chris and Ross are given the chance at WRC which they deserve. They exemplify resilience and outstanding performance, and fans really want to see these rising stars compete.”

Rally Warrior has announced long standing supporter, CarFinance 247 as key partner of Chris Ingram. “We’ve been part of Chris’s journey for the past four years and have been continually inspired by his dedication, skill, and willingness to triumph over adversity,” said Louis Rix, co-CEO of CarFinance 247.

Chris also announces further partnerships with Protec, Kroon-Oil, Fleetback, WS Transportation, HAH Whisky, Stilo Helmets and race-wear partner FreeM, who are all backing his campaign to reach the highest level. Ingram is hard at work preparing for the first event of his debut season at World Rally Championship level at the Croatia Rally, which gets underway in the capital Zagreb on April 22. The Tarmac event, a new addition to the WRC calendar for 2021, will mark the start of a six-event WRC3 programme for Chris and Ross ahead of WRC2 bid in 2022.

Chris, a 4-time FIA title winner, who won the Colin McRae ERC Flat Out Trophy on only his third start in the ERC, plans to announce the remainder of this 2021 schedule in due course. What will be the realisation of a childhood ambition follows more than a year of struggles with mental health and battles to secure the funding needed to compete in the WRC.

“There have been some really tough moments to get this far but it feels so special to be able to say I’m a World Rally Championship driver,” said Ingram. “I’ve given everything I have to get this opportunity and I have so many people to thank and so much to be grateful for. “Winning the ERC title in 2019 opened up lots of doors and I was close to landing a really good drive in 2020. The pandemic slammed all those doors shut, but I never gave up and never stopped believing my dream would come true. I’m so lucky to have this chance.

“It’s a two-year programme and I can’t lose sight of that fact. It’s been almost 18 months since I last drove a top level rally car so I’ve got to build up my confidence, learn the events and adapt to the championship because it’s the biggest thing I’ve ever done. The World rally rounds are another level. I’m going to give it everything.”